Cruising is not all palm trees and rum punches, sometimes stuff sucks. I’ve given a lot of thought about whether or not to write about the crappy stuff, but a main reason I started this blog was to help would-be cruisers. “The Dark Side” is a little series that talks about stuff that sucks. Read at your own risk :)

I mentioned in our coming home post that JR and I suffered from something I began calling “cruising fatigue.” The first time I had heard about this fatigue, we were in Nassau. We ran into some friends who were heading north after a good long run in the Bahamas. We were still heading south and still very enamored with our new lifestyle. This couple had just spent about 5 weeks in George Town, Bahamas and when I asked them why they stayed so long in George Town (at that time, I had no idea we’d beat their record ;) she answered, “Well, we were tired of dodging weather, and researching anchorages, and staring at charts, and rolly anchorages. We needed a break.” I was like, “Whaaaaaat?” We were just moving south and still so excited! I kinda’ just brushed it off, admittedly thought “That wont be us!” and continued with our visit.

Fast forward several weeks and JR and I found ourselves sitting out yet another front, this time “Between the Majors” near Staniel Cay. And guess what? We were tired! It seemed we were dodging daunting west winds at least once a week, worrying about Chris Parker’s constant threat of squalls, freaking out about the odd anchorages we had to hide in and their lack of good holding, we were on edge and afraid to leave our boat because a big, giant squall might come through and pull out our anchor and push us into 1 of the 30 other boats who have all squeezed into this small, crappy anchorage to be protected from weather! Breathe!

Tired? Dodging? Worrying? Freaking out? Hiding? On edge? But, Drena, you don’t work and you are in paradise! I know, y’all, it sounds whiney and ungrateful, but problems are problems and worries are worries!  As my dear friend Penny would say, problems are relative! Sigh. JR had it worse than me, saying on multiple occasions that the crystal clear waters of the Bahamas are not worth the stress! It was a taxing time. And guess what? Once we made it to George Town, we relaxed. It’s so protected and lovely that we were able to take a break from checking weather, and moving anchorages, and checking charts, and we chilled out! We also finally understood exactly what our Nassau buddies were talking about. It made sense, it was relevant, it absolutely happened to us too! 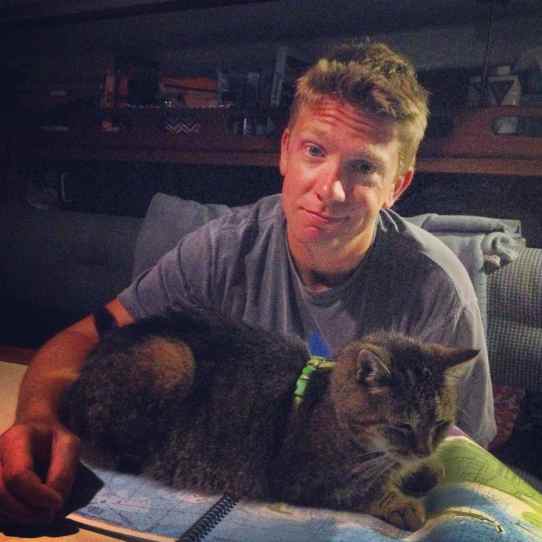 We were good again for a long time, but once we made it back to Staniel (just a few weeks ago) to dodge another front (surprise!) it was 2 months later and we were stressed again! I won’t rehash the whole coming home thing, but not only were we experiencing cruising fatigue, it was compounded with hurricane season sneaking up on us, insurance expiring, and a new deadline upon us: August 1st! Needless to say, we are very pleased to be back in the calm and protected waters of the US :)

I haven’t read a whole lot about cruising fatigue, but Jake and I know it exists. When I started asking around and really listening closely to what my friends were saying, I found out it was pretty normal but gets discussed and dealt with differently per person.  We are all so happy to have this opportunity, it sometimes feels wrong to grumble about it. But the stress makes sense, right? An experience like this shouldn’t come too easy, if you want it, you gotta work for it!

So, if you’re a cruiser or an aspiring cruiser, remember to give yourself a break once in a while to decompress. It’s tough out here. Beautiful and peaceful and lovely and amazing, but tough. Be on the lookout for the cruisin’ crummies and take care of you (and your crew!)

If you’ve had an experience like this, please share.  It would’ve made a world of difference to me to really know it existed before I came down with a case of it myself ;)