I was super stressed about our adventure into Portsmouth. If you look at the charts, they are littered with symbols and colors and shapes that I’m just not used to yet. It looks crazy congested and stressful and I knew some big old navy ship was gonna sneak up behind us and yell at us for for some secret nautical rule that we should have known but didn’t.

But it wasn’t crazy at all. It was fine. We aren’t really sure why it was so chill, maybe because it was the weekend, or because it was Veteran’s Day weekend, but it was really chill and interesting. 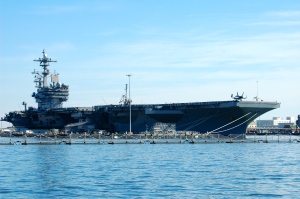 Big old Navy ships and what’s that I spy on the bow of the boat?

More big ships and the US Naval Hospital Ship “Comfort.”

Big old cranes all lined up ready to load the cargo ships. 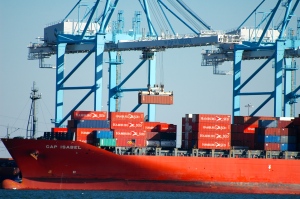 And here they are working. Looked like they were playing with Lego’s. It was really amazing.

This picture labeled itself :)

Sailing out of Norfolk.

This was our view from our marina. This is pretty representative of the skyline around these parts. 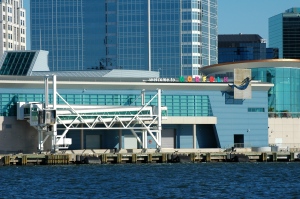 This must be downtown, downtown.

This is the official start of the Intracoastal Waterway (ICW).

We also decided to find a cheap marina for the night to “recharge” as we like to call it.  That means filling our water tanks, topping off our fuel, charging our batteries, showering, getting rid of trash, emptying our waste tank (pump-out), and doing a little laundry.  I’m not one to head to the marina with the biggest ad in the Waterway Guide, I like to look for the more intimate spots.  So I did some digging and found a relatively inexpensive place, right off our route on Scott’s Creek in Portsmouth called Portsmouth Boat Center.  The staff was right up our alley.  Really cool guys with tons of experience and super helpful.  They helped us dock, helped us bring our dinghy on deck, helped us fuel and pump-out.  Buzz, one of the worker bees, even taught us a thing or two about tying up and motoring, and Kevin told JR a really cool story about a ghost ship that was on the hard in their yard!  You should ask JR to tell you the story too, it’s pretty cool.

Another neat thing about this place was that they had music playing all over the yard and as you walked through, the station would be different and you got different vibes from different parts of the yard.  I heard our wedding song for the first time this season as I was leaving the showers because they had the Christmas station playing and Sunday morning they had a great station playing all acoustic stuff.  The “Acoustic Hangover Brunch,” as they called it, became the perfect soundtrack to our boat chores and since we left, we’ve been rocking out to that station all the way down the ICW.

Journey tied up nicely at Portsmouth Boat Center. You can see Buzz varnishing teak in the background!