Map of The Berry Islands with respect to Bimini.

Our overnight brought us to The Berry Islands.  Although not penciled in our original itinerary, the overnight and the prospect of sailing (not bashing) made “The Berrys” an attractive diversion on our way to Nassau.  This was our first taste of uninhabited islands and no connection to the outside world.  It was a beautiful respite and we enjoyed the isolated, sandy beaches and the company we found here.  Here’s a map of the places we anchored and a bunch of pics.

We anchored here the morning after our lovely night sail.  There were a few other boats in the anchorage and I read that there was a place to tie up the dink not too far away.  After a nice long nap, we headed over and walked around the town.  It was not a touristy place at all.  It was a small town, with courteous folks, but not much for us to see.  I thought their church was beautiful and cursed all of the roosters that cock-a-doodle-dooed ’cause I could hear them from the boat!  We walked to the end of a street and found the cut that leads you to the only marina here.  It was rocky and daunting.  We met 2 little girls that were walking home from school.  They want to be a teacher and a nurse when they grow up, and the kept calling me ma’am.  It was a nice town.

2. White Cay (we anchored west of it)

We traveled up and around the islands to get to White Cay.  At the northern tip are the cruise ship islands and the cruise ship anchorage.  I enjoyed waving to the little tiny people on the big giant cruise ship and our little sailboat buzzed right passed!  We almost didn’t anchor here because our friends on Sea Major had a bit of a time with this cut.  I’m guessing the weather was more of an issue for them because we did OK and I’m really glad we went.  We spent 2 nights here and I would have been OK with another 2.  It was the most beautiful anchorage I have seen so far, and although there was another boat near us, it was very secluded.  It was the first anchorage where we were able to dive on the anchor to make sure it set.  We dinghied over to Hoffman Cay one day and searched for a blue hole that we had read about.  After beaching the dink, we found a path that led us right there!  It’s a round, saltwater hole in the middle of the rocky island, about the size of a baseball infield.  We read that it connects to the ocean near the bottom of its 600-foot depth and was explored by Jacques Cousteau.  We also read that it is believed to have been formed either by a meteorite strike or some other natural cataclysm.  Pretty cool, huh?  The path continued and took us to another secluded beach where we spent a few hours swimming and chasing sting rays.  The next night we met the folks from the other boat anchored near us and joined them for a camp fire and drinks on the beach.  They were a fascinating couple from Austria with tons of cruising experience and are pretty serious divers.  So much so that they have a dive compressor on their beautiful Lagoon 42, Shangrila, to charge their own air tanks.  They have a great story as to how they started cruising, ask us about it next time we see ya ;)  Click the first pic for a slide show and more ramblings :) 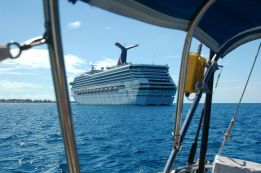 On our way to White Cay, we got to go through the cruise ship anchorage. These big old ships own a few of the northern islands and bring folks there as one of their “destinations.”

We sailed right through them!

I’m 98% sure I saw a mermaid to the right of this ship. JR is in denial, but I know the truth.

JR playing with his auto-pilot. In other words, Journey was drivin’. 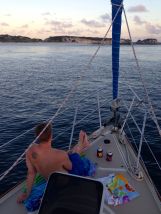 Anchor down in White Cay. One of the most beautiful anchorages we’ve seen so far. 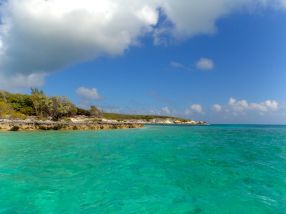 Our dinghy ride to Hoffman Cay.

The path that led us to the blue hole on Hoffman Cay.

Little hermit crabs littered the path to the blue hole.

The blue hole on Hoffman Cay.

Me at the blue hole. 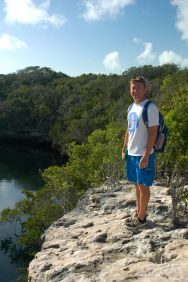 JR at the blue hole.

Another shot of the blue hole

Written in the sand :) 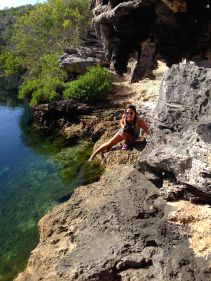 Me, sticking my toe into the Blue Hole. JR said it was a vortex and would immediately suck me down. I had to prove him wrong :) 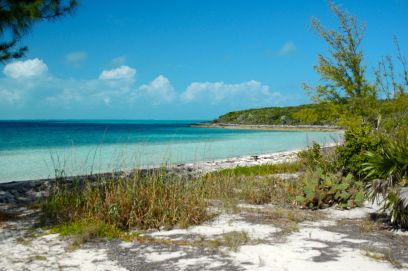 This beach was at the end of the trail after passing the blue hole. Not a bad view. 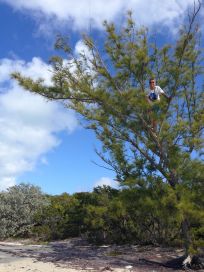 Jake thought the view would be better from up there…

We found a sand dollar on the beach in Hoffman Cay.

Me, getting’ my cartwheel on.

Us at the beach on Hoffman Cay. 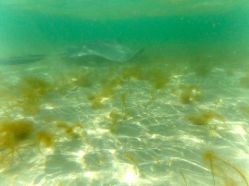 JR got a shot of one of the sting rays trolling around the beach on Hoffmans Cay. 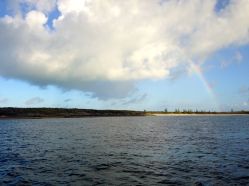 A rainbow near White Cay. 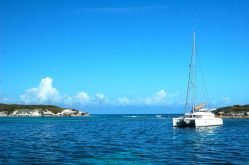 Our new Austrian friends on Shangrila. We had a nice camp fire and chatted with them one night over on the sandy beaches of White Cay. 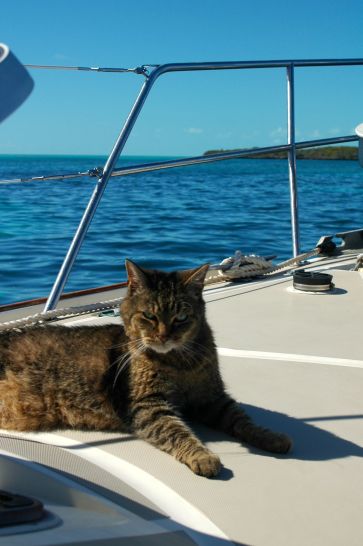 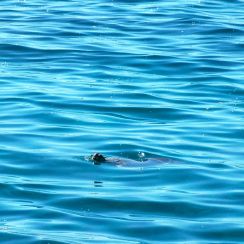 Our second sea turtle sighting. JR jumped in after him, but he quickly disappeared! 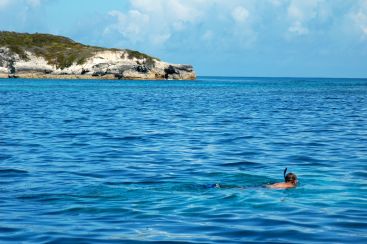 Jake snorling in White Cay (looking for the sea turtle.)

3. Alders Cay (we anchored south west of it)

Alders Cay is “private” which means someone owns it and you can’t go and play on it!  That’s OK though because we spent most of the day in White Cay and headed over to Alders in the afternoon just to get a little closer and a little better angle to Nassau.  We had a beautiful evening there and even did some snorkeling.

Sunset during our short visit to Alders Cay. 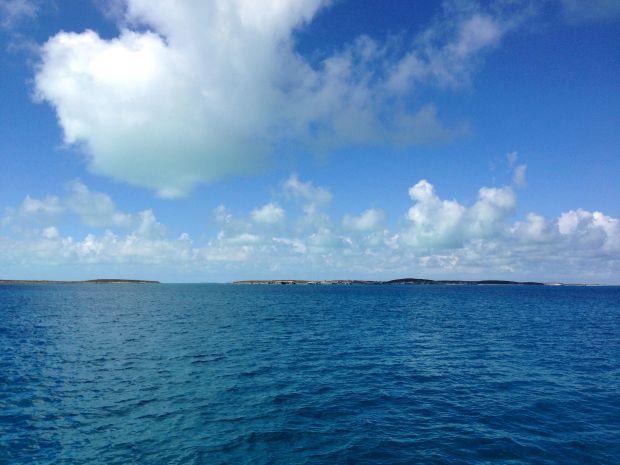 Leaving Alders Cay. Do you notice anything about the bottom of these clouds!? 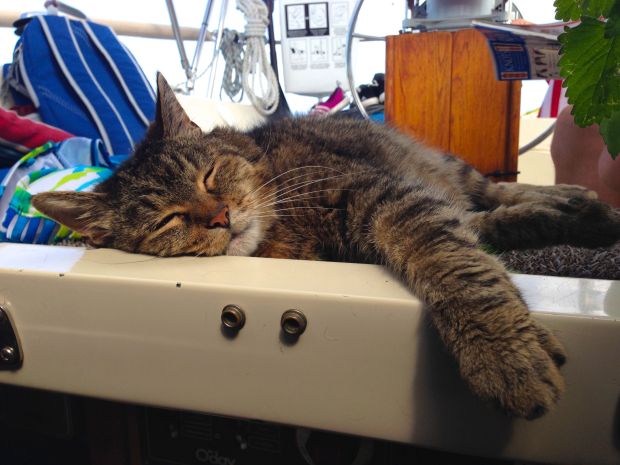 Leo found The Berrys quite comfortable.