1.  supply with food, drink, or equipment, esp. for a journey.

2.  set aside an amount in an organization’s accounts for a known liability.

Let’s go with the one about providing food for Journey!  I guess that’s not really what Mr. Google Dictionary meant, but I love it!

Before this trip, the word provisioning wasn’t really part of my vocab.  I’m pretty sure I heard it in a war movie like, “These are your provisions for this war” or something like that, but I’ve never had to use it in real life…  Come to think of it, we got lots of provisions on the first day of school, didn’t we!?  Anyway, once you hit Florida, the buzzzzz is provisioning.  Sorry to sound like a broken record, but we hadn’t really planned on provisioning in Vero!  It was about a week in when a couple of our friends said, “No, Drena, we can’t go play with you today, we have to go PROVISION!”  I was all like, “What?  Already?”  Then I kinda’ realized we should start thinking about it too! 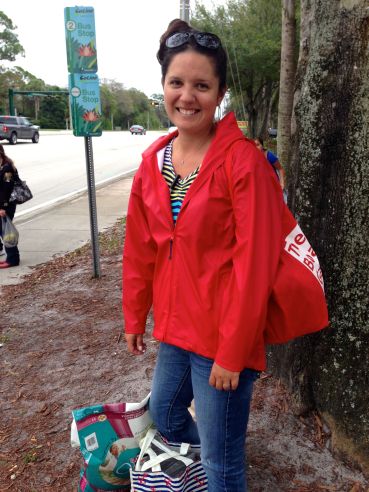 Me, provisioning for Leo and waiting for the bus. Not fun!

Let me back-up for a minute…  When you go to the Bahamas on a boat you will not, might not, probably won’t, possibly won’t, maybe can’t, possibly may find food there.  The jury is still out on this one.  Many cruisers buy A TON of food in Florida and store it on their boats.  There are a couple of schools of thoughts here…  1. You gotta’ buy every ounce of food in America, as Bahamians don’t eat regular food but will sell Americans regular food for a 300% mark up.  2. You should stock up on a few things that you can’t live without, and then hit up the markets over there, it’s good for the local economy.

But there’s a bit of a hard mentality among cruisers, and you can’t help but feel the pressure!  In Vero, the lounge is a scary place to be because everybody is talking about “hopping,” weather, Chris Parker, SSBs, batteries, and PROVISIONING!  Dun dun duuuuuun!

I did my research, I did.  I consulted my go-to cruising blogs and found the same polar opposite provisioning opinions!  I was left to formulate my own plan!  Dangerous.

So here’s what we did:

First, per recommendation of a friend, I went through the boat and wrote down EVERYTHING (food, toiletries, meds, etc.) we already had on board.  This was a chore, and a headache, but very informative.  Not only did it help me see what we had, it also showed me exactly what we use, kinda’ like a food diary.  Anyway, I made a list with amounts (like 2 tubes of toothpaste) and then broke it into categories like condiments, canned veggies, etc.  That idea came from The Boat Galley.  Carolyn has a PDF you can download of her provisioning list.  Ours was very different, which is part of the problem with this whole provisioning thing, it’s really individualized, but I stole some things from Carolyn’s list that I hadn’t thought about yet.  Roach traps for instance, you never know if you’ll bring home a few little buddies with that market trip, so it’s a good idea to have some traps. 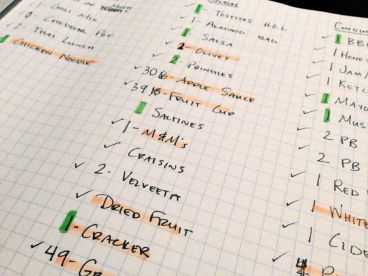 Second, I highlighted the stuff we could buy at Costco.  That’s right, we went to Costco, because we rented a car.  How ya like them apples?  Enterprise has this deal that if you rent a car over the weekend, it’s $10/day plus gas.  You can’t beat that, especially when you split the cost with other cruisers and plus, carting a 20 pound bag of cat food on the bus is not fun.  I know from experience.  So we went to Costco and bought stuff we use all the time like shampoo, M & M’s, and toilet paper.  In this case, we did buy 3 months worth of stuff because it was cost effective and now we don’t have to worry about running out of conditioner or finding JR’s certain deodorant in the Bahamas.  We elected not to buy the Costco paper towels, however, because we do in fact have a bit of a space issue. 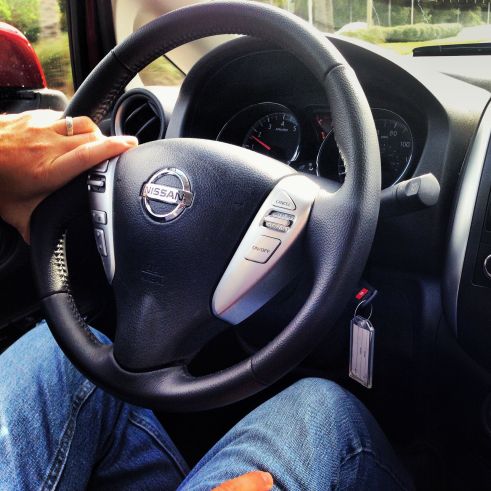 Our little car (for the weekend).

Third, we went through that list o’ mine and decided how much of each item we wanted to buy here, then we went to Wal-Mart.  I hate Wal-Mart.  And I am a giant hypocrite because we’ve been there a million bajillion times since we left home…  I’m sorry Mom-and-Pop-shops-that-can’t-beat-Wal-Mart-prices, I’ll be back as soon as I have a full-time job again, blah. 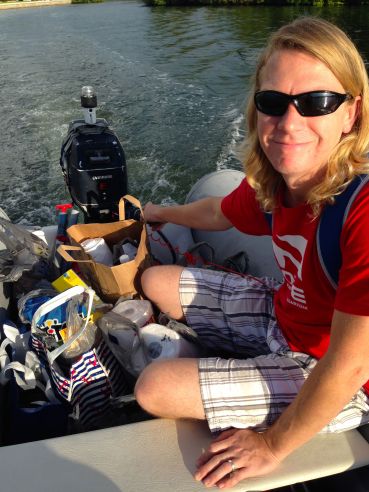 And don’t forget, we have to put all of our provisions in the dink and ride them on over to our big boat! Whew!

Of the three of us, Leo is the most provisioned!  He eats special food that we have re-bagged and stowed in various parts of the boat, he has morning treats that he can’t go without, and or course there is his kitty litter.  I bagged it in “uses” so there are about 10 grocery bags full of litter that I can grab from every other week, instead of hauling out and pouring from the big bag.  I’m a genius. 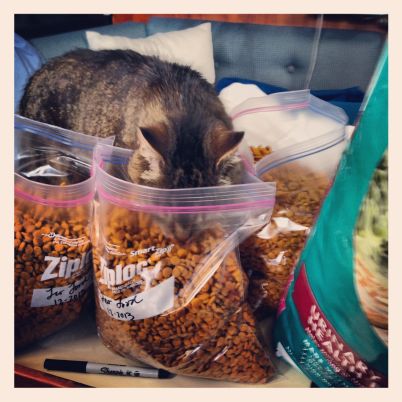 Leo wasn’t too keen on the idea of storing his food away for later. He binged for a bit :)

So we bought lots of basic stuff, lots of toiletries, and a medium amount of food.  I tried really hard to balance that hording mentality with the “stimulating the local economy” mentality.  If we are at anchor for a bunch of days, we’ll have food.  Granted, it might be pancakes and mac-n-cheese, but it’ll be food.  If we’re out and about in a beautiful little town and they have fresh anything, you’re dang right we’re gonna’ buy it up.  And that’s how we provisioned! 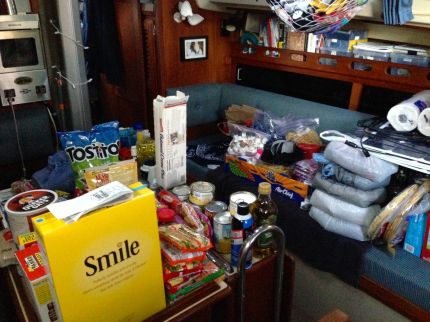 Here’s our booty. See, even Leo’s litter is stacked and portioned! Now, where to put it all!?