Even in our slip, we are too far from the marina’s wi-fi source to get a decent connection for our online activities.  And since we plan on staying on the hook more than tying up to docks, we definitely needed something to maintain some connectivity to an internet source when we can’t pick up cellular signals.  And thanks to some comments on a previous post, we decided to go with a wi-fi booster.

I did some research on what other cruisers are using and it seemed that they were mainly made up of an antenna, receiver, and sometimes a router to broadcast the signal to multiple devices like smartphones, tablets, or additional laptops.  There seem to be two main competitors that have packaged systems where they put all the components together, make it weatherproof, and put their name on it that have become popular among the boating community.  As you may already know, I am not one for paying someone else for something I can do, so I decided to build my own system that closely resembled those two products. 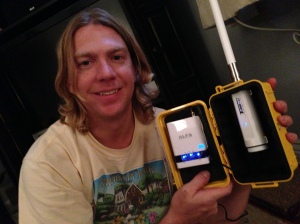 The one I built uses essentially the same components as one of the commercially available pre-packaged systems, but I chose a different receiver in order to save a little more on the system cost.  It  was a bit of a tight squeeze in that waterproof housing, but it all fits, I believe it will still be waterproof, and all that is left to do is to mount it on the boat and run a power cable to it.  I did have some “difficulties” with the initial hardware setup of the first router that was sent, our pc totally died when I physically connected the router to it, but this has been deemed strictly coincidental.  I received some excellent customer support from the supplier, Rokland Technologies, and got the second one to work without much trouble.  We haven’t tested our range, but I expect it to be comparable to the products I mentioned above and use just as little power.  Not including the cost of the new laptop that we needed anyway :), I saved us more than 50% of the cost of the system by building it and sourcing the parts myself.