There are several reasons why we did not have any type of renewable energy installed on Journey when we left the Chesapeake Bay.  The main reason was that we knew we would be motoring for hours on end almost every day and that would keep the batteries charged up without any worries.  Another reason was that we had planned on getting to Ft. Lauderdale and hitting up one of the more well-known marine energy distributors and ordering right out of the warehouse since it was on our way rather than paying for shipping costs out of the kitty.  Needless to say, plans changed.

Since we had decided to stay in Vero Beach for Christmas, we figured there was no sense in spending more time in Ft. Lauderdale later for more boat work, especially since Vero is such a perfect stop for little projects and deliveries and we didn’t know if we would have the same conveniences in Ft. Lauderdale.  It was at that point that I started feeling the pressure of getting things figured out and ordered so that we would not be stuck in Velcro Beach any longer than necessary.  Though it is very reasonably priced, it still costs money and we have to run our little generator to keep the batteries charged!

I had done a little bit of research at one time, but did not really have a solid plan for what we were going to buy other than knowing it was going to be solar panels.  I just put it off thinking that we would talk to the experts when we got to Ft. Lauderdale and narrow down the details there.  With the change in plans, that meant I had to figure out how much power we needed, find out the most cost-effective solution, and get it all ordered, fast!  For me, this was not easy and it didn’t really end up being fast either since I was trying to balance this effort with getting our water maker installation completed too (more on that later!).

I really wanted the new style semi-flexible solar panels as opposed to the fixed frame panels since they are much lighter, have a much lower profile and the installation only requires velcro and some sewing rather than custom stainless steel tubing.  I also found that some of the most efficient solar cells available are made by a company called Sunpower and they are used on semi-flexible panels.  It was at this point I was really leaning toward semi-flexible panels, but I was having trouble with the big price tag for those panels from the marine energy distributors.  Then, completely by coincidence, we just happened to sit down next to Mitchell and Natalie from Sea Major at the Cruiser’s Christmas Dinner, whom we had not met before, and overheard them talking about their solar panels.  I started asking questions and Mitchell told me he had recently installed some semi-flexible panels he bought from an eBay store that use the efficient Sunpower solar cells and was pretty happy with them.  The only real drawback to these solar panels is that they are assembled in China which is usually not a good thing for marine products.   But since the solar cells themselves are supposedly from a reputable American company, the panels have a 10 year warranty, and the price tag was low enough compared to anything else we were considering, it seemed to be worth the gamble. 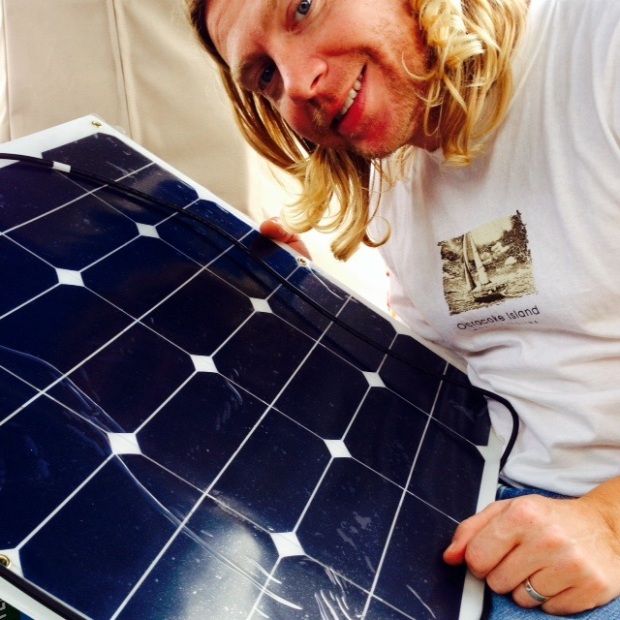 Then I had to figure out what configuration of panels would make the most of our available space.  I thought about it a couple of ways, and by my calculations we needed around 2,400 square inches of panels to keep up with our anticipated demand in the Bahamas.  Once I decided which panels to buy minding all of the guidelines for a good installation and the specifics of our boat, we ended up with six 50 watt panels to make 300 watts covering 2,400 square inches.  It took me another day or so to lay out how everything would connect and where the cables would run so that I could order the right accessories.  In all, it took me entirely too long to make up my mind of what to buy, but the cost of staying in Vero Beach on a mooring for a couple of more days is way less than what I would have spent had I gone to the marine energy distributors.  Now, if the sun stays shining on those panels as much as we are expecting, we will be in great shape!